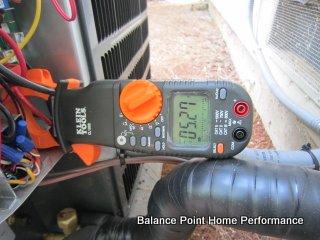 You might think that state energy code means that new heating or cooling systems will operate efficiently, after all, they test for duct system leakage. One of the best analogies we can give for this is if you cut yourself and you're bleeding sealing the wound makes sense, but you could still have high blood pressure. Your heating and cooling system is the same way. Most focus on only what they are required to, which is sealing the biggest leaks in the system. Our overriding goal is to make sure that the maximum amount of heating and cooling energy makes it where you want it. We use the following test (and targets) to diagnose existing systems and commission new ones. Ultimately our goal for home comfort systems which draw minimal energy is to deliver true comfort. 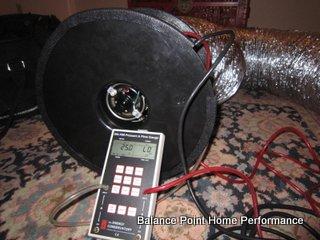 Duct leakage testing: The state suggests that 5% leakage is a good target for duct systems. 5% is not even a fixed amount of leakage. It's based on the volume of air the manufacturers say the equipment is capable of moving. So 5% leakage for a 1.5 ton system, the smallest you can buy, is 30 CFM of air leakage, and 5% for a five ton system, the largest you can buy, is 100 CFM of air at a test pressure of 25 pascals. The reality is that if you want an efficient system you want zero measurable duct leakage. While it's not an industry standard yet, it's readily achievable to seal every new duct system to less than 25 CFM at 25 pascals regardless of system size.

The best in the industry regularly have zero measurable duct leakage.

What would you say if your plumber asked what an acceptable leakage rate was for your plumbing or waste lines? To put this in further perspective many of the existing duct systems that we test (including new ones) leak more than 30% of measured airflow.

Speaking of measured air flow that's another important metric for heating and cooling system performance. The total amount of air delivered to the right locations is critical to overall system efficiency, after all it is how the BTUs are deliverd. One of the gotchas of sealing duct work is that it often results in reduced system airflow or increased fan watt draw. That's because sealing a duct system that is undersized relative to how much air the fan in your system moves can make the system work less well based on increased resistance (static pressure). The state median for system static pressure is 150% of the pressure budget that most furnace manufacturers recommend. This is due to poor duct design and mismatched equipment. So two important measures for system air flow are how much total resistance the fan is experiencing (total external static pressure) and how air is delivered to each location.

Are we the right company for your home?

We have very high standards. If you decide to work with us, you are assured of a home that performs well beyond what building codes require. We take the extra care and time to get it right. We're not for everyone, but if you want a home for life, we should talk.

Let's Have a Conversation